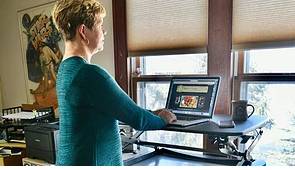 Workers who stand at their desks typically use 12% more energy, according to scientists. Avoiding sitting in a chair all day can help people to stop gaining weight, they say.

They measured the energy consumed by people who stand while at their desks compared with those who sit and found the muscles that people use to keep upright burn relatively large amounts of energy.

Standing desks are increasing in popularity, driven by a growing concern about “sitting-down syndrome”, the term used by doctors to describe the mix of poor circulation, low lung capacity, obesity and lethargy often found in people whose sedentary lifestyles mean that they spend much of their time seated. James Betts, professor of metabolic physiology at Bath University, who led the study, said: “Prolonged sitting is a major health concern.”

He said the “proliferation of height-adjustable work stations” as well as wearable technologies have “the potential . . . to facilitate effective management of body mass”.

His team worked out that standing increased people’s energy consumption by about 10 calories an hour. This means that standing all day would burn calories roughly equivalent to a sweet snack, such as one McVitie’s milk chocolate digestive biscuit, which typically contains about 85 calories.

This sounds small but it is also roughly the amount by which people overeat each day. That is the real cause of the slow, steady weight gain that many experience as they grow older. His team measured the rates at which people consumed oxygen and exhaled CO2 while seated compared with standing, using the results to calculate their energy usage.“We showed that standing expends 12% more energy than sitting,” Betts and his colleagues said in a research paper.

Concerns about the health of people who sit for a long time every day, such as issues with backs, necks and hips, recently prompted the Health and Safety Executive to warn employers that they have a “general duty to ensure that seating is safe and that it does not pose a health risk to employees”.

Betts warned that although standing at a desk might stave off weight gain, it would not help people to lose weight. Exercise is essential for this. “The focus should be on regularly interrupting prolonged sedentary behaviours, both sitting and standing still, to insert physical activity that gives your muscles some work to do and adds to your rate of energy expenditure,” he said.